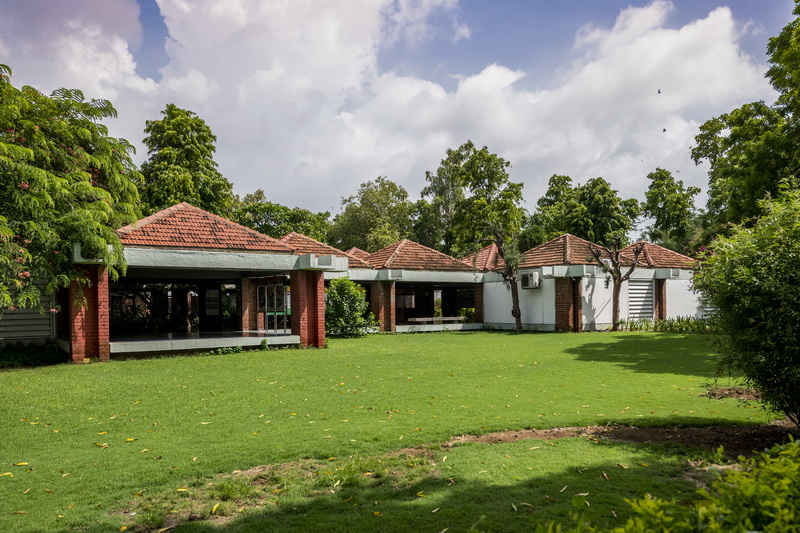 Previous Next
Ahmedabad’s Popular, Independence era, Historic Monuments, Sites With Audio Guides, Sites with Bluetooth Beacons
Approximate Distance From Where You Are: 216.54 Kilometer

Well-known as the Gandhi Ashram, Sabarmati Ashram is the place where Mahatma Gandhi lived and worked from 1917 to 1930.

The ashram is a serene campus with a profusion of mature trees, various low-rise buildings that played an important role in the life and goals of Mahatma Gandhi, and a view of the Sabarmati River from the former prayer area.

Architecture enthusiasts will also enjoy seeing the memorial museum designed by Charles Correa. Among all the memorials to Mahatma Gandhi in India, the Sabarmati Ashram is among the most moving.

When Mahatma Gandhi returned to India from South Africa, he first settled at the Kochrab Ashram in 1915 but in 1917 moved to this larger complex by the Sabarmati in 1917.

Between 1917 and 1930, Mahatma Gandhi with his wife Kasturba and many followers lived and worked in this ashram, which became the headquarters from where he spearheaded the struggle for independence.

In 1930, he set out on the Salt March to Dandi. He never returned to the Sabarmati Ashram after that.

The Sabarmati Ashram is a lush green complex where neem trees trill with the calls of birds and squirrels. Start by visiting the Gandhi Smarak Sangrahlaya (memorial museum), which offers an insight into the life, principles and achievements of Mahatma Gandhi.

Charles Correa designed it in keeping with Mahatma Gandhi’s principles of simplicity and his vision of a rural country where people lived flourishing self-sustaining communities based on agriculture, cottage industries and animal husbandry.

This memorial museum has three major galleries – one titled "My life is my message" offers information about Mahatma Gandhi’s life and important incidents between 1918 and 1930 at the ashram, the second has eight life-size paintings of Mahatma Gandhi, and the third has one of the largest archival collections about a single person in the world with 35,000 books, more than 31,000 letters to and from the Mahatma, over 8000 manuscripts including articles written by him, photographs and documents.

From here, you can walk to the Hriday Kunj, Gandhiji’s personal residence in the Ashram. This house of Mahatma Gandhi and his wife, Kasturba, exhibits some of their simple processions. In one room there is a spinning wheel and work table, in others are personal effects like a Chinese toy of three monkeys, coconut chopper, wooden spoon, thali, chappals (slippers), stone bowl, a tumbler he used in jail, an urn for water, a shirt made by Gandhi for a Harijan, dhoti, a bedsheet, handspun yarn, yarn spun by Vinobaji, towel, bag, purse.

Near Gandhiji’s residence are the residential quarters of Vinoba Bhave, whom Gandhi rated as a true Satyagrahi for his commitment to truth, from 1918 to 1921, and Madeliene Salde, a British Admiral’s daughter who left her home in England to live and work under Mahatma Gandhi inspired by his ideology.

She dedicated her life to human development, the advancement of Gandhi's principles and the freedom struggle in India. Gandhi gave her the name, Mira, and she became like his daughter.

Near the Hriday Kunj is the prayer area. Mahatma Gandhi and his inmates of the ashram prayed before starting to work. Besides Bhajans, discourses and readings from holy books, like the Gita, Quran and Bible, occasionally featured in the prayer schedule at this site.

From this prayer other simple white-washed buildings in the ashram, very much in keeping with Mahatma Gandhi’s ideal of a village life, served various purposes like cottage industries, guesthouses and communes for ashram inmates.

You can get a sense of Gandhiji's life, the history of the movement and those who worked with him, at the Gandhi Smarak Sangrahalaya, a small museum that includes excellent written documentation and pictorial, a library of Gandhian literature and paintings, and an immense archive of letters written by Gandhiji, every single one on the back of used paper. The ashram includes the Hridaykunj, Gandhiji’s sparse living quarters, Vinoba-Mira Kutir, where Vinoba and Mira each stayed on separate visits, a Prarthana Bhumi, a guest house and a building which is used as a training center for cottage industries, these all are preserved as part of the museum. The ashram is open from dawn to dusk, however the best time to visit is in early morning, as the sun rises over the river, and people sense a meditative spirit. One must visit the Ashram for:  Historical association with Mahatma Gandhi.  Memorial Museum.  Information about India’s Independence Movement.  Architecture by Charles Correa.

Approximate Distance From This Site: 1.09 Kilometer
Tomb of Darya Khan

Approximate Distance From This Site: 1.14 Kilometer